The Globe was built in 1815 and was one of the first US ships to sail in the greater Pacific.  It started its 4th voyage in 1822 with 21 men whose ages ranged from 15 to 29.  They hunted whales the along the coast of Japan for most of 1823.  The ship landed in Honolulu in December 1823 and 6 crew left the ship and 7 new crew took their place.  The 7 new crewmen had little respect for the ship’s captain and the presence of this new crew enabled Samuel Comstock to enact his plan for mutiny.  Samuel had a troubled life and had long had delusions of living on a small island in the Pacific and creating a kingdom with the native people as his servants.  Samuel convinced many of his shipmates to the mutiny and this occurred near Fanning Island, 900 miles south of the Hawaiian Islands.  They killed the captain, the 1st, 2nd and 3rd mate and Comstock assumed control and sailed the ship west towards what was then know as the Mulgraves (Mili Atoll).  As the Globe approached the southeastern portion of the atoll, some Marshallese sailed close for observation and were fired upon.  The Globe then sailed to the southwestern corner of the atoll and landed on an island east of Mili Island (name??).  Comstock then ordered all the ships supplies including sails to be taken ashore.  His intention was to burn the ship so that his kingdom could be established and no crew could escape.

Not all of the Globe crew wanted to stay on Mili and Comstock tried to convince several Marshallese men to kill  these men.   However, his crew found out and Silas Payne led a group of men against Comstock and killed him.  Afterwards, Payne sent 6 men to guard the ship.  He made an error of judgment and sent Gilbert Smith with this group and Smith persuaded the rest of the men to escape and sail the Globe to get help.  The Globe had enough sails and supplies on board to make a 4 month long journey to the US consulate in Valparaiso, Chile.

Silas Payne’s was left on Mili Atoll with remaining crew without a ship.  His interactions with Marshallese was not positive.  He obtained a Marshallese wife and when she ran away from him,  he angrily sought her in her village.  He found her surrounded by a large group of people there to protect her.   The Marshallese were not happy with how they were treated and the Marshallese massacred most of the remaining mutineers.  Out of 9 castaways on Mili Atoll, only 2 were allowed to survive, William Lay and Cyrus M. Hussey.   William Lay, was 17 years old and was treated kindly by the people of Mili.  Before the massacre the Marshallese invited him to stay in their homes and enjoyed his company.  During the massacre he was physically shielded by an elderly couple.  Lay and Hussey lived with the Marshallese for the next 2 years but were separated on different islands and had occasional brief contact with each other.  Lay and Hussey  were the first Marshallese to live with the Marshallese and learn to speak Marshallese.  They took notes during this time and later wrote of their Marshallese experiences and observations.   These writings provide important documentation of Marshallese culture in the 1820’s.   Many of these are discussed in the book Etto n̄an Raan Kein: A Marshall Islands History.

After the Globe made it to Valprassio, Chile the crew met with the US consulate and the Navy schooner the Dolphin was sent to rescue the remaining crew on Mili.  When the Dolphin left Chile they had no idea how many crew of the Globe were still alive.  The Dolphin landed on Mili in late 1825 and at that point realized only 2 crew members survived.

The aftermath of mutiny, murder and massacre of crew on Globe led the US to create policies that would protect its ships while in foreign waters.  The Globe events marked the 1st recorded act of Marshallese aggression towards strangers.  Previous to the Globe, numerous ships had passed and briefly interacted with Marshallese the logs describe these interactions as peaceful and friendly.   The Marshallese were provoked by the unacceptable behavior of the Globes mutineers and they responded in violence.  For the next 30 years there are records of Marshallese attacks against foreign ships and crews and a reputation for Marshallese ferocity. 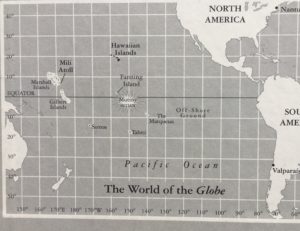