November 17th is President’s day for RMI.  This is the day that the 1st President, Amata Kabua, took office in 1979.   We honor this holiday with his biography.

Amata Kabua became the first president of the Marshall Island and is considered the founding father of the modern Marshall Islands. He was born in 1928 on Jaluit atoll. He was a descendent by adoption from Kabua the Great, the iroijlaplap (paramount chief) who led diplomatic relations between the German traders and Marshall Islands in the 1880s. Amata Kabua’s mother Dorothy Tarjikit Laelan Kabua was a paramount chieftain of Majuro. Amata’s parents were first cousins.

He attended Mauna Olu College in Hawaii and received an associates of Arts degree. He began his career as a school teacher and later became a superintendent. Amata represented Kwajalein atoll landowners during their earliest negotiations with the US Military over their use for missile testing and a 99 year lease was signed in 1964.

In 1965 he was one of four Marshallese representatives to the First Congress of Micronesia and he served one term as President of Congress of Micronesia in 1969. In 1973 he changed course and start working to separate the Marshall Islands from the rest of Micronesia. Under Amata’s leadership a constitution was drafted in 1977 and ratified by popular vote in 1979. In 1979 Amanta was elected as the first president of the Marshall Island and he served 5 consecutive terms for a period of 17 years. After his older brother Joba Kabua died in 1982, Amata inherited the Iroijlaplap title for Majuro Atoll and certain parts of the Ralik Chain. In 1986 he led the Marshall Islands in negotiations with the US for a political status that would replace the United Nations trusteeship. The Marshall Islands became a sovereign nation in free association with the US under the international treaty referred to as “The Compact of Free Association”.

He was married to Emlain Kabua. Amata was an accomplished musician and singer. He wrote the words and music for the Marshall Islands National Anthem, “Forever Marshall Islands”.  He died in office after a long illness, in 1996, in Hawaii. He was 68 years old. The airport on Majuro is named in his honor. 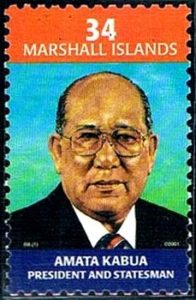