One of the most famous handicrafts are the “kili” bags.  These bags were the result of the Kili Development Project that was initiated by the Trust Territory government in the 1950’s.  James Milne brought a woman named Liburin to Kili for 6 months to teach the Bikinians how to make high-quality amimano (handicrafts).  By 1954 the Bikinian were making ekkwai (sennit rope), many types of hats and a new style of women’s handbag that became known as Kili bags. These Kili bags were extremely popular with Americans on Majuro and Kwajelin.

These Kili bags are white and square, with lids that securely close.  Part of the process for creating a Kili bag requires the purse to be “plaited over wooden molds using pandanus leaves for the inside of the bags and finely split coconut fibers for the outside.

The bag was popularized in the early 1960’s by Jackie Kennedy-Onasis, who carried the bag on most state occasions held through the spring and summer months.  The bag was a gift from the Marshall Island’s first president, Amata Kabua.   In 2012, the Queen of England was also given a kili bag by President Christopher Jorebon Loeak during the opening of the London Olympics.  This bag was placed in the Royal Collection Trust. 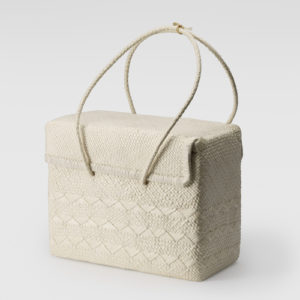 Handicrafts of the Marshall Islands by Judy Mulford. 2006

To order bag from Marshall Islands: