Germans entered the Marshalls during the 1850s, with Adolph Capelle arriving on the Ebon from Samoa in 1859. Five years later he was joined by Jose deBrum, a Portuguese whaler. Together they built a trading post on Ebon and permanently settled there and married into Marshallese families.

Subsequently, several German firms began establishing themselves. Foremost Godeffroy & Son of Hamburg, which had pioneered copra production on Samoa by exporting fried coconut meat rather than pressed oil that could go rancid on the voyage. In the 1870’s Godeffroy & Co. set up a trading station on Ebon. Another German company, Hersheim & Co. was to extend its trading stations to Jaluit, Namdrik, Mili and Maloelap. Capelle and deBrum eventually acquired Likiep Atoll and turned it into the most efficiently run profitable copra operation in the Marshalls.

These early traders worked with Iroijlaplap Kabua Kabua, the most powerful Iroij of the Ralik (sunset) chain. Through such relationships, the German traders were able to gain leases on individual islands and expand their networks.

The hold on the islands was consolidated through the Treaty of Friendship, which Imperial Germany signed with all the relevant Ralik chiefs and the establishment of a German Consulate in 1875.

Following a dispute over territorial and commercial rights in Micronesia, Germany officially bought the Marshall Islands from Spain in 1885. Britain also raised no objection to a German protectorate over the Marshalls in exchange for German recognition of Britain’s rights in the Gilbert (Kiribati) and Ellice Islands (Tuvalu). Germany sent the gunboat SMS Nautilus to Jaluit where Captain Rötger and Iroij Kabua and 4 lesser Marshallese chiefs signed an agreement making the Marshall Islands a German protectorate in 1885. In 1886 Nauru was added.

The German government handed the administration of the protectorate to a concession company, formed by a merger of all German trading interest in the Marshall Islands. Then new Jaluit Gesellschaft had a virtual trading monopoly (until1906) squeezing out American and British competitors. They administered the islands from 1887 until 1905. They conscripted the islanders as laborers.

Important social changes occurred in the Marshall Island during the German period. The introduction of a head tax, payable in copra, consolidated the colonial return from the islands. Because traditionally, the chiefs would be given a share of all produce, the Germans made the Iroij responsible for tax collection and formalized a share of the copra given to them.

Even though copra had been important before the formal establishment of the German colony, it became the dominant industry in the Marshall Islands, with all islands contributing.

Catholic missionary Father A. Erdland, from the Missionaries of the Sacred Heart based in Hiltrup, Germany, lived on Jaluit from around 1904 to 1914. He was very interested in the islands and conducted considerable research on the Marshallese culture and language. He published a 376-page monograph on the islands in 1914. Father H. Linckens, another Missionary of the Sacred Heart visited the Marshall Islands in 1904 and 1911 for several weeks. He published a small work in 1912 about the Catholic mission activities and the people of the Marshall Islands.

Germany treated the Marshall Islands as an economic colony and never made any attempt to fortify or defend them in case of war. Thus when World War I broke out, Japan, which had joined the allies quickly after the beginning of the war, sent a naval squadron and took possession of the Islands in October 1914.

Even though the social and commercial influences of the German period were profound, the passage of time, as well as the ravages brought about by World War II, has diminished historic places from the German period. The most remarkable of these is the deBrum House on Likiep, which as erected by Joachim deBrum in 1904-05. It is the only intact German period wooden building in the entire Micronesia and it still retains much of its original furnishings. 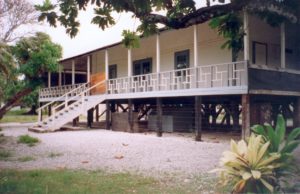