The weather in the Marshall Islands is tropical, hot and humid.  However, this heat is tempered by trade-winds which prevail throughout the year.  The average temperature hovers around 80-81°F (daily range 79-89°F) and rarely fluctuates.  This is one of the most outstanding features of the climate, in fact, the range between the coolest and the warmest months averages less than 1°F (see figure below).  Also interesting is the fact that nights, although they feel cooler, are actually 2-4 °F warmer than the average daily minimum, this is because the lowest temperatures usually occur during heavy showers in the daytime.  Humidity is typically 75-81%. The ocean water temperature is a comfortable year-round 82-84 °F.

Day length in Majuro averages around 12 hours, typically 6:30 AM to 6:30 PM and varies little though the year. The day length difference between summer and winter solstice is only 48 minutes in Majuro versus 7 hours in Minnesota.  Because of little variability in day length, Daylight Savings is not observed.  The Marshall Islands are very near the International Time zone and its time zone is GMT (Greenwich Mean Time) + 12 hrs.

Like elsewhere in the Pacific, the skies are quite cloudy.  The dry season is between December and April.  The rainy season lasts from May to November, with the greatest falls between July and October.  Rainfall varies greatly throughout the Marshall Islands. The southern atolls, that are closer to the equator, are wetter and rainfall can average as much as 160 inches per year, while the dry, northern atolls may only average 20 inches.  When rain does fall it is often heavy; however, tropical storms, such as typhoons, are very rare. 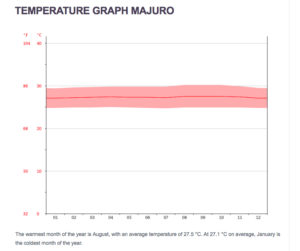