The Marshall Islands were named after Captain John Charles Marshall who was born in 1748 in England. At the age of ten, Marshall became an apprentice sailer and spent the majority of his life at sea. 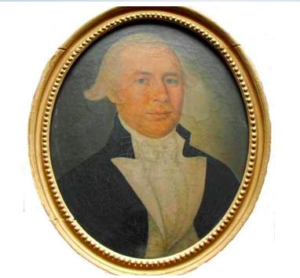 In 1787, 18 years after Cook “discovered” the eastern coast of Australia, Captain Marshall made history as part of a 9 transport and 2 men-of-war fleet that sailed from England with 700 convicts to form the 1st British settlement in the Pacific at Port Jackson, Australia (near Sydney).  This fleet of ships were known as the famous (or infamous) “First Fleet” and its mission was to drop the convicts as far away from Britain as possible.

After Australia, the fleet of ships headed for Canton (southern China) to pick up goods that could be sold back in England. Most of the boats took the direct route to the north and northwest. However, Marshall, captain of the Scarborough and Thomas Gilbert, captain of the Charlotte, ventured a more circuitous route and sailed east past Norfolk Islands, passed Fiji on the west and then turned north.

Their first and only stop to the Marshall Islands was Mili Atoll on June 25, 1788 where they experienced “friendly and relaxed relations”. From Mili Atoll, Marshall and Gilbert sailed though the Ratak chain and sighted Arno, Majuro, Aur, Maloelap, Wojja & Aelok atolls. They did not stop at any of these other atolls.

From the Marshall Islands Marshall and Gilbert sailed onto Canton. Their new trade route was to be known as the “Outer Passage” and was afterwards preferred as a safer route and it became common to see British vessels passing through the Gilbert and Marshall Islands. The older route that passed near Palau was called the “Inner Passage”

John Marshall also captained the Scarborough on her second voyage transporting convicts to Australia in 1790, but the convicts coming aboard were in poor health and many did not survive the voyage; this, combined with an attempted seizure of the ship by the convicts, deterred him from any further voyages of transportation.

Captain Marshall, saw action during the American Revolutionary War of 1778 to 1783 and also during the Napoleonic Wars of 1803 to 1815. As captain of the ship Diana he was severely wounded while repulsing an attack by a French privateer. He died in 1819 at the age of 71.