The breadfruit tree is one of three dominant trees that grow in the the Marshall Islands.  The other two dominant trees are coconut and pandanus.  This tree is mainly found in Oceania and has been a life-sustaining resource throughout history.  It was the Breadfruit tree that Captain Bligh from the Mutiny on the Bounty was tasked to harvest from Tahiti and bring to the Caribbean to function as cheap, high energy food for slaves.  Breadfruit was introduced to the Marshall Islands by early Micronesian settlers around 2,000 years ago and has since been introduced to many other parts of the world.  It is now grown in approximately 90 countries throughout South and Southeast Asia, the Pacific Ocean, the Caribbean, Central America and Africa.

The breadfruit tree is is in the Mulberry family or Fig family (Moraceae) and the scientific name is Artocarpus altilis.  There are up to 20 different cultivated varieties in the Marshall Islands.  It’s common name is derived from the texture of the moderately ripe fruit when cooked, similar to freshly baked bread.  It is known as Mā in Marshallese.  In the Marshall Islands the tree tends to grow more towards the center of the island away from salty winds and high tides as it is less salt tolerant than other trees, such as the pandanus and coconut trees. 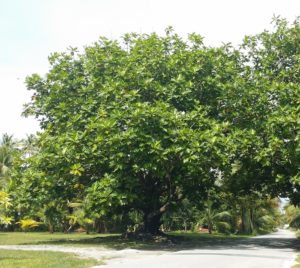 Mature trees can grow up to 80 feet tall and depending on how they are cultivated the canopy can either be spread out or grow more upright.  Breadfruit is one of the highest-yielding food plants, with a single tree producing up to 200 or more grapefruit-sized fruits per season, requiring limited care.

There are numerous uses for the breadfruit tree.  The fruit is a major traditional staple and ceremonial food with a potato-like flavor.  The mature fruit can be baked, boiled, roasted, steamed, fried, or made into soup.  When the fruit matures it can start to rot within 48 hours and during this period the Marshallese peel and preserve the breadfruit.  Breadfruit can be fermented to make bwiro that can be stored for 12 or more months before being eaten.  Thus it has long served as an important emergency food in times when food is scarce (for example, following disastrous storms or other natural calamities).  Marshallese outrigger canoes are built from breadfruit trees.  It’s lightweight wood is resistant to termites and shipworms. 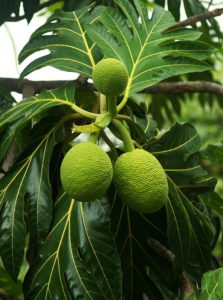 Scientists are researching new uses for breadfruit that may make it a food for the 21st century.  Breadfruit is gluten free and can be turned into flour and it is used in bread, pancakes, pies, noodles, chili, chips, pasta, curry, chocolate pudding, and even fermented into beer and wine in Samoa.  Compounds in the long breadfruit bud function as mosquito repellant when burned (like a mosquito coil), and the white milky sap of the tree is a source of latex.  Breadfruit can now be harvested all year round, and though no one island group can meet the demand for breadfruit, it is hoped that regionally they can.